It would appear to be fitting, at this point, to offer our con­gratulations to Hamish on his well-deserved promotion to the rank of Sergeant, and I am sure, that in so doing, we echo the sentiments of you all.

You may be aware that Hamish McCrackers was adopted, at the end of 1953, as the mascot of No. 1 (Apprentice) Wing, which had just then arrived from Cranwell, and that he was purchased by the Apprentices themselves, by whom, of course, he is still maintained.

What may not be so apparent, however, is the reason why Group Captain Bruce Robinson, C. B. E., the Commandant at that time, chose that particular brand of animal and how it acquired its extraordinary and seemingly geographically inappropriate name.

The answer to the first question is simple—it was obviously necessary to obtain a mascot superior to, that is, larger than, the Halton goat, and, in this, Group Captain Robinson was undoubtedly successful.

The reasons for the name are less obvious, apart from the fact that Hamish is a Shetland pony.

Actually, “Crackers” was his name at birth, appropriate enough, as the happy day was 1st April, 1952, while the “Hamish” and the “Mc” derive from the Gaelic form of the Christian name of the Officer Commanding No. 1 Wing—Wing Commander James Morgan, D. S. O., and from the existence of a strong Scottish contingent on the Staff at that time.

However, perhaps Hamish can explain it all better himself.

A short History of Hamish

Strange as it may seem to the unedificated—I was born and NOT issued. I well remember the occasion, for I was very small at the time and I suppose that it must have been a blue sky for I’ve been mucking about with R. A. F. blue for a long time now. Anyway, it happened on All Fools Day, being the first of April, 1952. What a day to get clobbered with! Hence the name CRACKERS and being a Scot, the natural prefix, Mac. Still, I first saw the light of day in Scotland, which is near England and I guess that I was earmarked for export immediately my mother saw my skewbald complexion, shaggy haircut, efficient teeth, sharp hooves, nasty temper and rolling eye, because after I'd been sculling around “ye banks and braes” for eighteen months or so, along came this mon wi’ a daft hat on who said: “Hoots Mon, ye’re a braw laddie, we’ll ye no come along wi’ me and jine the colours?” and I, being April Fool by birth and Crackers by name, having the spirit of adventure hot within me, came down to Locking and swore—Gosh I’d a right to—didn’t you? I learned later that the man largely responsible for my being pressed into service and the man who was later to become my dear friend and benefactor, was the late Sir Ian Orr-Ewing, M. P. for Weston-super-Mare, so you see I never did have to write to my M. P. for I used to see him quite regularly. Anyway on 25th November, 1953, the Apprentices of the day having dug deep into their pockets with hot, sticky fingers and having parted with some of their ill-gotten loot, I signed on for 30 years. Boy, they really saw me coming! I’ve often wondered why I was mustered as Agricultural Assistant u/t Ceremonial Mascot. Perhaps the frequent visits of the chaps with wheelbarrows had something to do with it. Still, I dropped the u/t title with the graduation of the 68th Entry in April of 1954 but the wheelbarrows kept coming. (I believe that it was a bumper year for dahlias, but when I went to have a “butchers” at the “Old Man’s” garden, he wouldn’t let me in and stronger wire was used on my paddock.—Gratitude.—Huh!) However, on the 22nd of May of this same year I found a super new paddock, when just after reveille a feller with a white dog collar on waved to me and came out of his stable to play. Oh what a time we had, jumping about the flower beds and running amongst the potatoes. It was great, but like all the others of the two-legged variety he soon got fed up and took off. (I was later informed that this was one of the local vicars who was not actually overjoyed to find me “on parade” in his paddock. Anyway, my herd leader at the time, Groupy Robinson, now Air Commodore Bruce Robinson, C. B. E., wrote him a nice letter and detailed four volunteers to put the damage right—good lads all.)

In June of 1954 I took the band to Earl’s Court and the Royal Tournament. Whilst there I was stabled with the gee-gees of the Household Cavalry; not a bad crowd for sassenachs, but a bit on the horsey side. There was a lot of marching to be done but nothing really untoward. I resolved even then, that one day, I would take some of the starch out of a queer looking bearded individual who ponced around with another herd. During 1954 I also made several local appearances for the benefit of the natives and the prestige of the School; the Battle of Britain Parade, the Cheddar Horse Show, and miscellaneous illegal sorties after lights out. The last were in order to visit numerous girl friends in the area, despite the wire surrounding the paddock becoming higher and stronger—but just when I was really starting to show my paces, they did it. What a rotten trick. Do you know they introduced me to a chap called VET—I haven’t felt the same since!

Following a reasonably quiet period in my career, during which I tried unsuccessfully to get a transparent waterproof coat to wear on parade in inclement weather, and was involved in some literary rudery with that odd individual of the other place (Halton) whom I spoke about earlier, I was promoted to L. A. A. This occurred on 6th December, 1955.

In the early part of 1956, many were the writings in books, periodicals and newspapers of my activities. Everyone seemed to want to know how many well-wishing fingers I’d nibbled and how many shins had been scraped a bit, not how even tempered, kind and obedient I am. Well I suppose that’s journalism.

Still the months dragged on, ’56 spread into ’57; rumours of promotion were abroad, but because of long inspections, haircut trouble and periods of sloth when I had to rely on the pony major for support, ’57 went into ’58 and ’59. I wasn’t completely inactive during this period—I attended all the best Annual Functions and at least once a month, I had the usual entertainment of watching people jumping round the totem pole on the square. Then it happened. Another spate of press engagements, pets’ club lunches and more rumours of promotion which were realised on 8th September, 1959 when I got my long awaited C. A. A. Nothing much occurred after this for a while, except for an improvement in quarters (in keeping with my promotion) and a strengthening of the fence surrounding them (not in keeping with it). Perhaps they think that I’ll be able to grow ’em again—only wish I could, then no matter how strong or how high they built it, I’d have a little nibble here and a little nibble there, cause they wouldn’t be able to stop me having a little nibble, but no, this is purely wishful thinking.

In June, 1961, at the Royal Tournament, I saw him. There he was, Lewis II, that smelly scented Billy from the place we don’t talk about. For years I’d nurtured the hope and here he was, right in range. I well remember the excited tremble I got, just before he got his—right in the fuselage. I pranged him real proper in front of thousands. All the ahs and the ohs from the assembly were as nectar to my ego, the culmination of years of secret longing expended in one well-placed strike—on reflection though I sometimes wish that the target presented had been the tail unit. I got three extra bales of hay for that caper but because of it I again languished in the shadows, a neglected embarrassment.

Then came a few new faces to brighten the scene of my off duty environment, for in January of 1963 I noticed an eagle eye peering at me from the “B” Sqn. C. O.’s office which overlooks my paddock. I wandered over to have a gander at this strange and gleaming pupil—it was definitely speculative. I glared back. Should I have a go? But no, better investigate further. It’s a good thing that I did, for my investigations revealed that this particular peeper belonged to Sqn. Ldr. “Buckshot” Buchanan who, when the mood is on him, shoots anything that moves—hence the speculative gleam I’d observed. Needless to say the Squadron Leader and I get on very well together (I keep out of his way).

Later in the year came another Mac in the person of W. O. McDonagh who comes and has a daily chat and varies the old diet a bit with a packet of biscuits or a nice carrot. I must say that things looked up a bit with his arrival. Perhaps it's because with a name like McDonagh he also is an exile—I must ask him sometime. He’s my pal; he brings me carrots and biscuits. Wish I had more pals—I SAY I WISH I HAD MORE PALS.

Next came another likely looking candidate in the form of Wing Commander J. A. Heatherill. At the mention HEATHER, nostalgia overwhelmed me and I resolved to have a natter with him at the first opportunity. (Could it possibly be?) The very next morning I waited for him and as he approached his Wing aitchque I neighed over:

Do you know, he immediately summoned a scribe in the form of Sergeant Hurst who was commissioned to take my dictation in a letter of appeal to the Management. The outcome of this was on the 8th February, 1964; another parade, another carrot, another stripe, and the title S. A. A. McCrackers.

In closing I must take this opportunity of addressing all the Apprentices foaled at Locking, for all those of the past, those of the present and those yet to come, work hard, work well and good luck. Lang may yer lum reek!

I have the honour respectfully to thank you for your recognition of my past services in promoting me to S. A. A. on the 8th February, 1964. The carrot was great.

The publicity of late in the local and national newspapers gave me food for more thought on a topic which I overhead you and Mr, McDonagh discussing some time ago, namely the remarkable lack of knowledge of my personal history by the Apprentices of the Wing.

With your permission sire, I will dictate a “Short History of Hamish'' (I already have a volunteer scribe) and submit it for your approval as an appendix to this letter.

I have the honour to be, Sire, 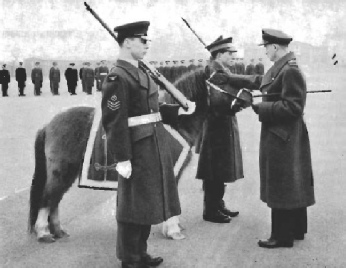 (Extract from The Locking Review Spring1964.)