Up the Pole with a Spitfire

There I was, quietly minding my own business, filling in my football pools, and drinking my tea, when the phone rang and a voice, absolutely reeking of gold braid, said, "Brailsford, this unit has been allocated a Spitfire for exhibition purposes and I'd like it mounting on a pedestal in flying position. Do you think you could do it?"

Five minutes later, my supervisor walked in and said, "Oh Sir! You do look pale. Is something wrong?" "Indeed there is," I replied."I can't keep my big mouth shut!"

Anyhow, to cut a short story short, I remembered that a certain Sqn. Ldr. Hartwell, an Engineering Officer, had mounted a Spitfire in a similar manner at Royal Air Force, Horsham St. Faith, so, accompanied by Warrant Officer Henington, the Warrant Officer  i/c Station Workshops, we hopped aboard our serviceable aero­plane and "beaded" (Ouch!) off to see him.

Now, I must confess, that the Squadron Leader practically handed everything, including drawings, specifications, suggested improvements, etc., to us on a platter.

Briefly, the plan was to:

Courageous as I am (with six whiskies inside me), I dared not ask A.M.W.D. to manufacture the plinth, as they were up to their necks in new buildings, bricklayers' strikes, work to rules, and all that kind of thing. However, as luck would have it, there was a detachment of those splendid, and I really mean splendid, tradesmen of the R.A.F., the Airfield Construction Branch, on the unit. They were building the new running track and it proved possible to get them to undertake the task of building the plinth. I must say, I was tremendously impressed by the way they tackled it. Within no time, they had dug a hole, approximately ten feet square and six feet deep. The S.W.O. was so impressed by this that he wanted to cover it with branches, twigs, and grass and march the 99th entry across it, Flight Commanders as well! This suggestion was turned down, on the grounds that the other entries were not fit enough to fill it in!

During the next few days, white the concrete was setting, the wood spoilers of Station Workshops made the wooden shutters (moulds) for the tapered column, upon which the Spitfire was to sit. Meanwhile, the blacksmith, and I must say, a blacker smith I have yet to meet, made the reinforcing mesh for the column. An interest­ing point here, is that the four threaded rods in the column, to which the mounting plate is bolted, are not one-piece rods passing right through the pedestal, but are actually each composed of three pieces, the first of which I have already mentioned. The idea is that allowance must be made for the aircraft vibrating during winds, which might well cause a rigid column to crack. These rods were positioned in the shutters and the shutters erected and strutted to prevent movement, then finally fitted with concrete and allowed to set. In the meantime, those noble exponents of crib, snooker, and darts, the highly skilled tradesmen of Station Workshops, had not been idle (which was none of their own doing). The machine tool setter and operator had manufactured all the special bolts, links, pins, etc., and the blacksmith, a "U" shaped frame of welded steel plate, which would later be fastened to the aircraft wing root bolts, and, ultimately, to the mounting base. The general fitter had prepared the aircraft and mounting slings and finally, the Spitfire had been painted in its authentic World War II camouflage.

At this stage, I think I ought to mention the Spitfire's history. Spitfire Mk. IX, M.K. 356 was an aircraft of No. 443 (R.C.A.F.) Squadron, No. 144 Wing. This Wing was then commanded by Wing Commander J. E. Johnson, D.S.O., D.F.C. It made several sorties over Normandy between April, 1944, and D. Day plus nine, but shortly after this, the squadron records were lost as a result of enemy action.

After the war, the Spitfire stood for many years at the entrance to R.A.F. Hawkinge, before being transferred to No. 1 Radio School.

To cut a long story even shorter, one fine autumn day in 1962, a ten ton mobile crane arrived from No. 7 M.U. Quedgley. The aircraft was skilfully lifted into position by the operator and, due to the exact positioning of the lifting slings giving an angle of 5° nose down and 10° list to port, it slid into place without any difficulty, and was soon firmly bolted down.

The bracing wires were then measured and taken to an engineer­ing firm in Bridgwater, who machine swaged the adjustable turn-buckles onto the ends.

Both BBC. and I.T.V. had expressed a desire to televise the mounting ceremony. Never having done this job before, we thought it prudent to lift the aircraft off and remount it for them the follow­ing day. This was to avoid having any amusing incidents or accidents shown on their candid cameras. After all, if Chiefy had trapped his fingers, I doubt if even the most rabid "kitchen sink" producer would have recorded what he said!

I must say, however, that the coverage given by them, was excellent. They preceded the show with true films of the Battle of Britain and then showed the aircraft being placed in position.

I have often heard visitors remark how impressive the Spitfire looks on its mounting. This, I am sure you will all agree, is a tribute to the skilful manner in which the personnel of Station Workshops and the detachment of No. 5004 Airfield Construction Branch carried out the job.

The sequel to the story is that the Wing Commander Admin., after a particularly hectic morning and possibly a hectic night before, suddenly looked out of his window and saw the pilotless Spitfire about to "beat up" his office. It was then decided to install the pilot who was named "Fit. Lt. Christie" his head having previously done duty as a hat model in Weston-super-Mare.

Fit. Lt. Brailsford, B.E.M., enlisted in December, 1938, as a u/t Flight Mechanic, and was on one of the first entries at Royal Air Force, Locking.

During the war, he spent four years in the Sudan and Egypt and, from 1952 to 1955, he was seconded to the Royal Pakistan Air Force, where he was awarded the B.E.M. for meritorious service.

He was commissioned in the Technical Engineering Branch in January, 1956.

During his tour at Locking, he has been in charge of Training Workshops, M.T. Flight, and Station Workshops, and has also taken an active interest in Station Hockey and the running of the P.S.I. Motor Boat.

However, I think that most of us will remember him for his appearances on the stage in amateur dramatics and with the Y.M.C.A. Shows.

We wish him a pleasant tour in Aden. 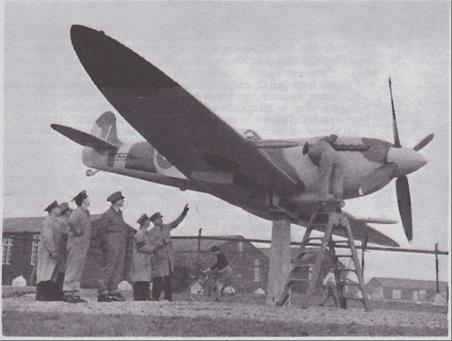 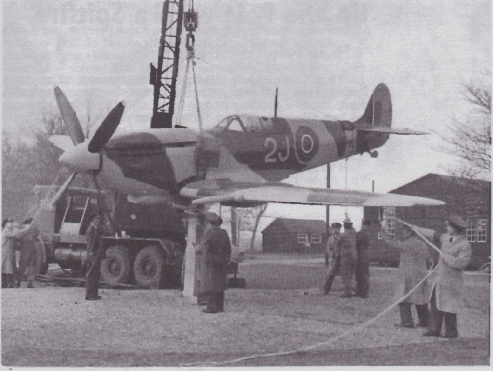 Further information about the various gate guardians which have protected RAF Locking are available on the 104th Entry website here.