A SHORT HISTORY OF RADIO TRAINING IN THE ROYAL AIR FORCE

At the outbreak of the First World War there were only a very few Wireless Operators in the Royal Flying Corps, and the need for additional Wireless Staff was acute. To ease the immediate emergency a number of Seagoing Wireless Operators were enlisted at special rates of pay and two hundred and fifty General Post Office Telegraphists were enlisted and given a short period of training at Marconi House, in London. A few more were then trained at the London Polytechnic, but it had become evident that a specialist school was needed, and No. 1 (Training) Wireless School was formed at Blenheim Barracks, Farnborough, Hants, where several thousand Wireless Operators and Wireless Mechanics were trained.

During the latter part of 1918, the School, which had been transferred from the Royal Flying Corps to the Royal Air Force on the 1st April, 1918, was moved from Blenheim Barracks to Flowerdown, and this move was completed by the beginning of 1919. Some time after the move the task of teaching Electricians for Air and Ground duties was added to the job of the School, and the School was re-named The Electrical and Wireless School.

In 1922 the Royal Air Force Apprentices scheme started, and the training of Radio Apprentices was added to the job of the School.

In 1929 The Electrical and Wireless School moved from Flowerdown to Cranwell. Just prior to the outbreak of the Second World War the name of the School was changed from The Electrical and Wireless School to No. 1 Signal School. This was probably due to the fact that the expansion of the Royal Air Force had made necessary the opening of additional schools. These were all given sequential numbers—No. 2 being opened at Yatesbury, No. 3 at Compton Bassett, etc. After the outbreak of the war when the training had to include new techniques associated with Radio, the name was again changed to No. 1 Radio School, the term Radio being used to cover both the Wireless and the Radar applications. In 1950 the development of the initial Flying Training School at Cranwell made it necessary to look for a new home for No. 1 Radio School, and Locking, which had up to that time been used to train Engine and Air-frame Fitters as No. 5 School of Technical Training, was chosen as the new home. 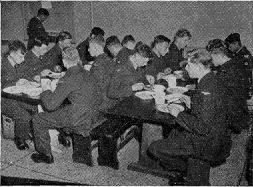 Down to the serious business of the day.