THE FREEDOM OF ENTRY INTO WESTON SUPER-MARE

On October 12th, 1956, the "Freedom of Entry into Weston-super-Mare" was conferred upon Royal Air Force, Locking. It is an honour which entitles the Station, amongst other things, to march through the Borough, "with swords drawn, bayonets fixed, colours flying, drums beating and bands playing." A stirring phrase, which quite rightly evokes a surge of martial splendour. Yet behind the gleam of sword and bayonet and the swirl of banner and flag, there lies a deeper meaning, of which, we at Locking should always be mindful, as we were when the pageant was first enacted last October.

A privilege, graciously given, demands a courteous and dignified acceptance; and so Locking was obliged to prepare carefully for her part of the ceremony. Reflexes for sword and rifle drill had to be sharpened; a formation ground and route had to be simulated on the Station. Music had to be rehearsed and applied to the Parade. The Parade Ground became the approach to Weston Railway Station where the Parade was to form; the Equipment Section and Gymnasium assumed temporary municipal grandeur, while the members of 'C' Squadron, Three Wing, perfected their sentinel stances from 3 Block to 2 Block. Thus prepared, did representatives of all Units from R.A.F. Locking journey to Weston-super-Mare on a dull October morning. 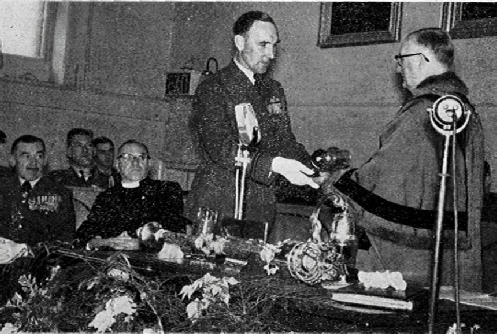 While the Parade was in process of formation the ceremony, conferring on the Station, "Freedom of Entry to the Borough" was taking place in the Town Hall. The gathering including Dr. H. W. Bradfield, (Bishop of Bath and Wells, Air Marshall Sir George Beamish, (Air Officer Commanding-in-Chief Technical Training; Command), Sir Ian Orr-Ewing, M.P., the late Air Commodore R. Philipps. and Mr. H. J. Barclay, an Honorary Freeman. The Mayor of Weston, Mr. H. J. Holcombe. spoke of the distinct local nature and meaning of the Honour. Alderman A. J. Heybryne proposed the resolution granting the Freedom of the Borough, having previously given an appreciation of the work of the No. 1 Radio School. The resolution was seconded by Mrs. M. J. Grey, the senior Councillor, who emphasised the relative youthfulness of the two communities and the value of the newly formed link between them. The Scroll, having been read and duly signed, was received on behalf of the Station, by the Officer Commanding, Group Captain D. N. K. Blair-Oliphant. O.B.E., who acknowledged the honour bestowed upon R.A.F. Locking and indicated how the present ceremony would foster the unity between the R.A.F. and the civilian population, which was necessary today if we were to preserve what we believed to be right, as it had been during the Battle of Britain.

Flight Lieutenant J. Hobbs, escorted by two Sergeants, then conveyed the scroll to the assembled Parade for their inspection. The route-lining Squadron, commanded by Squadron Leader B. J. Hooper. D.F.C. took up its position in front and to either side of the Town Hall, where the Mayor of Weston, flanked by various dignitaries, prepared to take the salute. The Parade, led by Wing Commander J. P. Adams, approached the saluting base as the Town Hall clock sounded noon. And the sun was shining. No. 5 Regional Band, directed by Flying Officer Hutchinson. played the Parade past the Town Hall. The Queen's Colour for the Royal Air Force in the United Kingdom was escorted by a Squadron from the permanent staff from Locking, commanded by Squadron Leader Fincher. No. 2 Squadron was commanded by Squadron Leader Haddon and No. 3 Squadron of Aircraft Apprentices by Squadron Leader Uprichard. The Apprentice Wing band was a centre of much attraction for the considerable crowd watching the procession, largely on account of the charm of its four-legged, non-playing, member. The Parade made its way by a circuitous route to Marine Parade, where it stood down in readiness for the return to Locking.

Service and Civilian Dignitaries at the saluting base during the March Past.

A luncheon in the Winter Gardens Pavilion followed for over four hundred representatives of Town and Station. Having wined and dined well, the guests were then entertained to some excellent speeches. An after-luncheon speech on such an occasion, demands a degree of seriousness, leavened with a touch of humour; all the speakers blended their ingredients well. The Mayor proposed a toast to the R.A.F. to which Air Marshall Beamish responded; Group-Captain Blair-Oliphant proposed a toast to the Borough of Weston-super-Mare to which Alderman R. W. Brown, the Deputy Mayor replied. The whole occasion was characterised by a pleasant informal dignity. The more serious aspects of the day were now over. Cinemas were free; a fireworks display was organised for the evening, followed by a dance, at which the airmen were guests of the Borough. As always, Locking enjoyed the amenities to the full. For one memorable day. Locking and Weston were brought together in all aspects of their various lives, ceremonious and social. Yet it was but a concentration of what is constantly happening; a perpetual intercourse between the civic and military communities. The granting of the "Freedom of Entry" not only made us realise more fully the value of this association, but it also strengthened it immeasurably, giving it a new and mature quality.

We thank Weston and honour their trust.